Rainy Pass is ahead of the teams, the highest point on the Iditarod.

In fast race years the first teams arrive in the dark, before sunrise. This year they get to see the mountains surrounding Puntilla Lake in full splendor. Nic Petite was first this year into Rainy Pass Lodge. Good luck.

“The sky and the sun are always there.

It’s the clouds that come and go.”

A ray of light.

November 1, I arrived in Jackson, Wyoming with the prospect to become a musher.

What did I know about mushing? Not much…

Last year I saw 30 or so mushers with their dogs on the Iditarod, probably the toughest sled dog race on Earth. I saw them arrive early in the morning, before sunrise, during the day, and in the middle of the night. Calm, hurt, tired, elated, you name it. 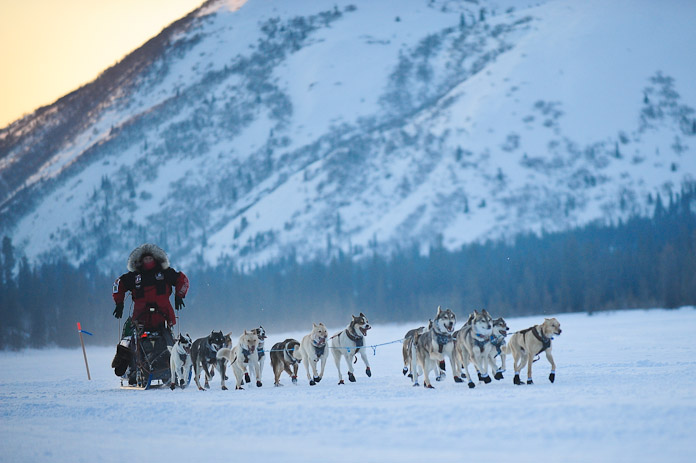 I saw them cook breakfast, lunch, and dinner on a frozen lake for the dogs. The team always comes first. Then they dipped their frozen food into the same pot of boiling water to eat last.

Never did it occur to me that I wanted to become a musher, although gliding through a winter wonderland propelled by a group of sled dogs looked appealing.

Sometime in October this year I contemplated what to do this winter. I thought about spending the winter on a warm island.

That did not happen, for whatever reason. Karma? Life is a strange sequence of events, leading us to places that we not even dream of.

I replied to an ad on Coolworks to spend the winter in Wyoming as a dog musher. I had visited Wyoming only a few times before, never enough time to climb in the Tetons, or to make it to Yellowstone. Then, I remember a beautiful climbing trip in the Wind River range. All the more reason to go. Although I had the worst cell connecction during my phone interview I landed a job offer to be a musher leading visitors on day trips into the backcountry of Teton County.

What an experience it has been so far. I was very intimidated in the beginning by the howling, barking, jumping and jerking of these sled dogs. They seem so fragile and small on one hand, but they are powerful and energetic on the other hand. And they have personalities you would not believe it. Pulling a sled is their life purpose. That’s what they are bred for, it’s in their blood. Once they see a sled and some dogs getting hooked up to the gang line they are going „ballistic“. „Take me! Take me!“ they seem to bark all at the same time.

Leaving Puntilla Lake heading for Rainy Pass, the highest point on the Iditarod. 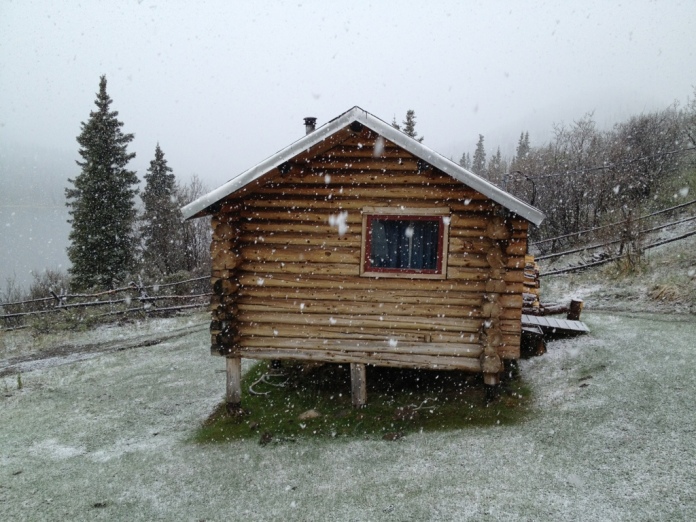 This is where I lived the last couple of days, La Chasse. A beautiful log cabin at Lake Puntilla. A wood stove kept me warm at night. Today we had heavy snow fall for an hour.

Since this is my first winter in Alaska, and this winter is apparently not your typical winter I don’t know what to make of the weather lately. 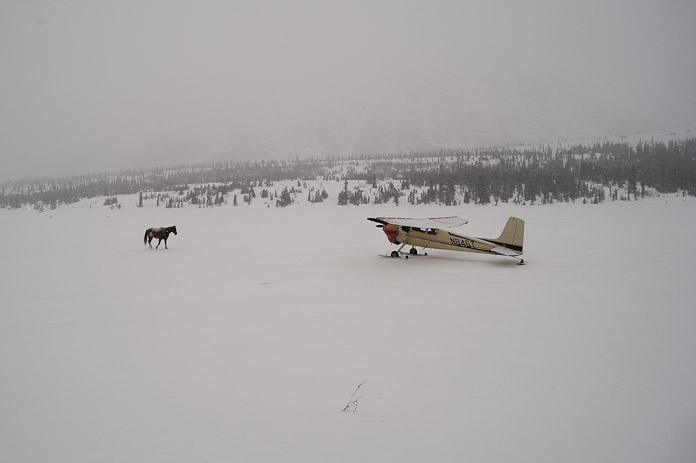 Picture-perfect bluebird days have given way to a crazy snow days. Two Iditarod Air Force planes made an unplanned landing today on Puntilla Lake after flying into a whiteout on their way to Anchorage. The pilots and one passenger stay in our guide shack. Smart pilots always carry a sleeping bag and some emergency gear. This will come in handy tonight.

We also think of Antonio de la Rosa, a Spanish adventurer, who stopped by at Rainy Pass Lodge, en route to Nome. He started to walk from Willow the same day the Iditarod started with a 90 kg sled in tow. He spent a sunny afternoon at the lodge, updating his friends, having a warm meal and a beer before heading out towards Rainy Pass, which was a howling gap in the mountains yesterday.

Today we woke up to steadily falling snow and low visibility. In the afternoon I hiked onto the lake and shot a panorama consisting of a faint line of trees, representing the lake shore. Nearby hills and mountains disappeared in the snow. 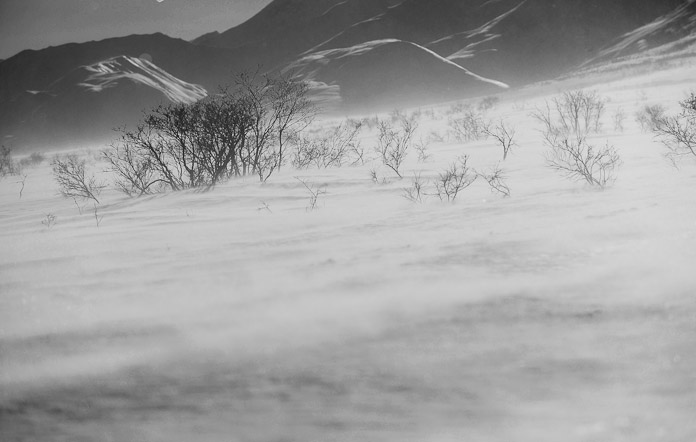 The Iditarod mushers are approaching their final destination, Nome. Jeff King is in the lead, just one hour ahead of Aliy Zirkle. One hour – after 1000 miles!

Hoping everybody is safe out there.

Today, Peter Ripmaster, the last runner in the Iditarod Trail Invitational left Puntilla Lake with blisters on his feet. In obvious pain, but otherwise in good spirits.

Robert Loveman spent the night at Rainy Pass Lodge with four Siberian Huskies on his way to Nome. He is not participating in the Iditarod race allowing him to set his own pace and playing by his own rules. He is mushing a small dog team, which he supports by being on skis. This year’s icy trail conditions may support his ambitious goal.

Robert Loveman and his Siberian Huskies

Good luck to both of you.

After less than 24 hours the first three riders arrived at Puntilla Lake! Tim Bernston, Kevin Breitenbach, and Alec Petro were the first ones to check in and leave Puntilla Lake for Rainy Pass a few hours later. A short rest in our warm guide shack and a hot meal was all they took before heading out again. 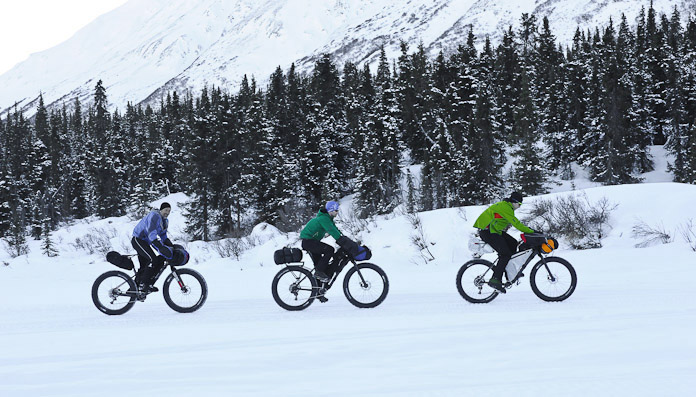 Pretty amazing sight seeing bicycles in the middle of nowhere. The bikes are snowbikes with big fat tires, and metal studs! Every rider carries some required gear, such as a sleeping bag, a sleeping pad, and food. 50 individuals have signed up for this year’s race, the majority riding 350 miles to McGrath. 22 riders attempt to go on to Nome for a total of 1000 miles. They follow the Iditarod trail, which seems to be very fast this year, despite or because of the low snow conditions.

So far I have seen one single speed, one bike without front brakes, no shocks, some carbon frames… I am not sure how important the gear is. The mindset is certainly crucial. This is not a race for the faint-hearted. Yes, there are food drops, cabins, and checkers along the way. Then again, there are long ours of solitude, exertion, and struggle. I am surprised how little attention these athletes get compared to the Iron Dog snowmobile racers or the Iditarod sled dog mushers. 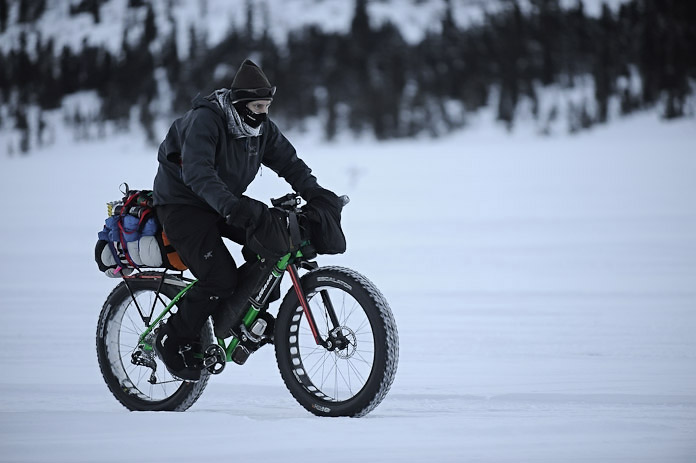 Eyes on the trail

Oh, I forgot. There are also a handful participants that walk or ski the distance. Looking forward to seeing those athletes to arrive at Puntilla Lake.

“The mountains are calling and I must go.” 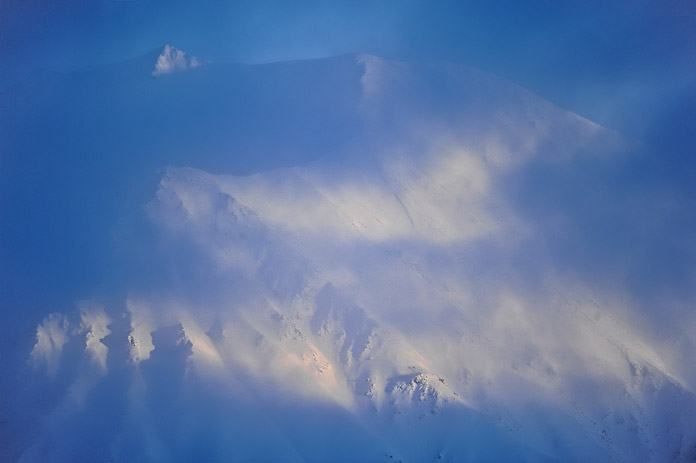 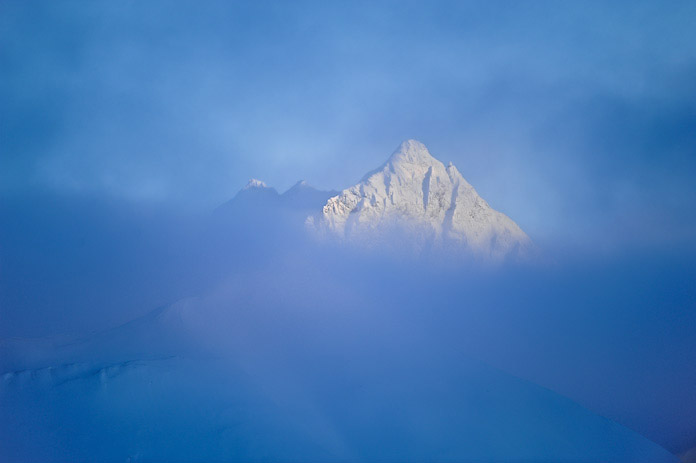 Those were the views 2 days ago with a winter storm moving out. The mountains started to peek through the clouds. Magical moments…

Today the sky is gray and a few flakes are in the air. Warm air! We almost got above freezing. In the midst of winter?

Looking forward to some visitors, an afternoon watching the NFL playoffs, and a scrumptious moose goulash tonight.

Between splitting wood, feeding the horses, hauling firewood and a bite to eat I managed to catch a glimpse of this beautiful peak to the North of us. Moose Valley leads to a number of steep granite towers with exposed rock faces. Snow will stick to the walls for a few days, then it will be blown off and show the brown underlying granite. The Kichatna Mountains are in this general direction, a remote range, visited by only a handful mountaineers. Further North is Mount Russell, a perfect pyramid, visible from hundred miles away, an image that follows me in my dreams.

“Free your heels, free your mind.”

That quote makes me smile. Steve, a fantastic pinhead and an accomplished mountaineer, would drop that line once in a while. We carved a few fine lines in Utah’s backcountry powder many winters ago. He would love this place, too. The snow is pure sugar, a pain to walk uphill, but boy on the way down, it just makes you grin insanely…

We got 8 inches of that light fluff in the last 2 days. Now the storm is hesitantly clearing, giving us glimpses into distant peaks and hills. It’s been a pleasant 20 degrees Fahrenheit lately.

After a long wait Santa came and brought presents, food and a chef.

This is what our little paradise looks like on a clear winter night.

The stars are out, the air is crisp.

Frozen waves on a creaking lake.